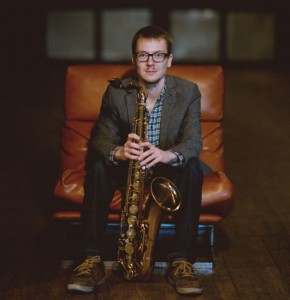 Wild Flower is an all-star band led by saxophonist Matt Anderson playing original music inspired by the sound and approach of jazz legend Wayne Shorter, alongside new arrangements of classic and lesser-known Shorter compositions. The band released their debut album featuring special guest trumpeter Laura Jurd in 2015 on the Jellymould Jazz label to widespread critical acclaim and airplay on BBC Radio 3 alongside a 13-date national tour and launch gig at Pizza Express Dean Street, with Selwyn Harris of Jazzwise writing “Their own unique stamp on Shorter’s very personal repertoire… of a quality that resonates with its inspirational source… Enjoyably un-pretentious.”

Originally hailing from the North Yorkshire Moors and now living in London, saxophonist and composer Matt Anderson was the winner of the Dankworth Prize for Jazz Composition 2017. He is popular as a sideman in a variety of projects on the fertile London and Leeds jazz scenes such as the bands of Jamie Taylor (also appearing as a featured soloist on his latest album) and Mark Donlon, performing regularly across the UK and internationally with recent appearances in New Zealand and Scandinavia. He also directs and writes for his own projects such as the Matt Anderson Quartet. In October last year he performed in Greece with Jiannis Pavlidis’ Quintet featuring legendary American jazz drummer Greg Hutchinson, and he is also a current Masters student at the Royal Academy of Music where he is the recipient of the George Drexler Foundation Scholarship.

Wild Flower draws on an all-star line-up of UK jazz musicians. Guitarist Alex Munk has recently released his debut album with his band Flying Machines to glowing reviews in the The Guardian and Guitarist Magazine, and is currently working with a number of distinguished UK musicians/groups including the world-renowned CBSO. Pianist Jamil Sheriff is the Jazz Pathway Leader at Leeds College of Music and is well known for his own projects such as his Octet, Big Band and Trio. Finally, drummer Sam Gardner and bassist Sam Vicary have built up a rapport playing together in a variety of settings, from appearing with jazz artists such as Jiannis Pavlidis, Tim Whitehead and Krzysztof Urbanski to performing and recording with ambient hip-hop band Ikestra, and the latter has recently recorded and performed around the world with the Cinematic Orchestra.

Needing no introduction, Wayne Shorter is a legendary figure across the whole spectrum of jazz, from Art Blakey’s Jazz Messengers and his own seminal albums on Blue Note Records through the Miles Davis Second Great Quintet and Weather Report to his new Quartet.

“Their own unique stamp on Shorter’s very personal repertoire… of a quality that resonates with its inspirational source… Enjoyably un-pretentious.”  Selwyn Harris, Jazzwise

“This is sophisticated stuff, with a proper handle on Shorter’s post-bop genius… Everyone plays superbly and the whole set is wholly recommended.” ***** Mark Gilbert, Jazz Journal

“artfully twisted performance… The idiom was nailed, but this is far more than a tribute band… They may have been mining a rich legacy, but they were in no way slaves to it… Go see them.” Mike Collins Blog

“The strength of this album… is that although Shorter may be the inspiration, these musicians… are very much their own people. This is a strong start from six players who sound like they get on very well together.” Peter Bacon, The Jazz Breakfast

“The leader’s own tenor is commanding both in its resonance and uninhibitedness, rallying his players to a full and fluent sound which exudes real enjoyment… it must take a certain amount of fearlessness to approach the venerable music of Wayne Shorter. Nonetheless, the sextet… feels impressively unrestrained, allowing efflorescent freedom of expression… Wild Flower is as fresh and imaginative as they come – this sextet deserves to flourish.” Adrian Pallant

“The band’s interpretations are cool and assured… Wildflower is an accessible and richly melodic album of great warmth and sophistication.” Peter Jones, London Jazz News

“the group’s performance incorporated all the classic Blue Note virtues; an engaging hook, swinging rhythms, some excellent horn interplay, and absorbing solos by Anderson on tenor and Leak on piano… proof if any were needed that jazz is very much a living music. Anybody who sees the sextet on this tour is sure to want to hear the album which features some excellent playing.” Ian Mann, The Jazz Mann

“Heritage repertory “golden age” acoustic jazz made with a great deal of respect and love by these talented musicians all beginning to make a name for themselves, Anderson’s tunes blending well with the classic material…” Stephen Graham, Marlbank

One thought on “Wild Flower”