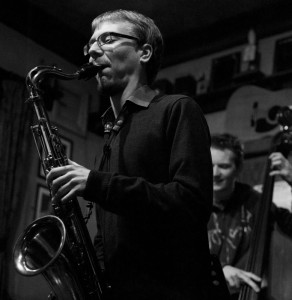 The Standard Deviation Quartet is a group committed primarily to playing standard songs. With their highly melodic, song-based approach, they create fresh re-interpretations of the standard repertoire as defined by composers such as Cole Porter and Irving Berlin. The quartet initially formed as part of Leeds-based guitarist Jiannis Pavlidis’ group, and after discovering a great chemistry together quickly sought to establish themselves as a band in their own right. They have appeared at many venues across the country (Splinter @ The Bridge, Newcastle; Sela Bar, Leeds) as well as appearing live on BBC Radio Leeds.

All or Nothing at All

“Matt generates a tremendous amount of rhythmic and harmonic interest… There’s tremendous subtlety in his playing but he also knows how to swing and communicate something very directly to the audience.”
Jamie Taylor

“Matt blows tenor in a most deceptive way… a simple, almost elementary, chorus or two before gradually building and evolving into a kaleidoscopic cascade of notes and phrases that burst triumphantly then disappear from all but the ears of the listener.”
Lance Liddle, bebopspokenhere blog